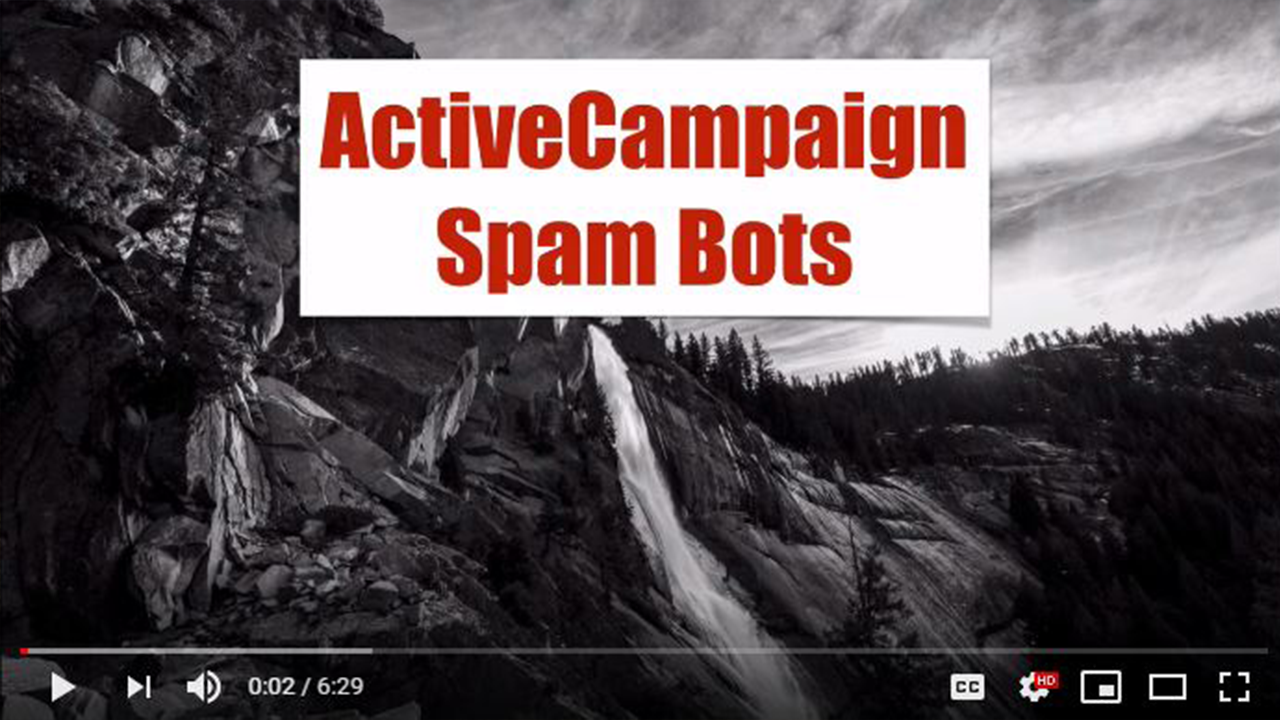 Now the challenges you don’t want to alienate people, legitimate people that are signing up and active campaigns got three recommendations here, kind of in terms of which is the most efficient to the least efficient. So the first recommendation is add a caption to all forms. Yes, great, that will do the job. The downside, you’re likely to have much lower conversions as a result.

Have you ever done a capture that you’ve enjoyed, or have got stuck in? Well, that’s problematic. The next option is add confirm, double optin to your forms. Now again, this can hurt conversions, but honestly, not necessarily a bad thing if you’re looking to get legitimate real people in there.

However, this isn’t perfect. The downside on this one is that bots can submit email addresses of legitimate people. Now Guess what? If those people get your emails, what are they going to think, oh, great spam, they’re going to hit the spam button. That does not help your deliver ability, you don’t want that to happen.

The third one, and in theory, the least reliable is add a hidden form to your form, hidden fields to your form. And the theory is if the bot fills that out, then fills out that form that field you know it’s a bot. Then you have an automation that automatically unsubscribe them then for anyone that’s filled out that hidden field.

Now the downside is bots are getting smarter, and a lot of times they will not fill out a hidden field if it’s empty. So what do you do? Instead of using the hidden field, use a text field and then hide it using CSS. So let’s dive right in. Now what we want to do here is a couple things.

And let me back up and tell you there’s some assumptions here. One, you know how to edit some HTML or the service that’s serving up your web form has the capability of being edited and you know how to go in there and change the code so that you can hide something, now I’m going to do it kind of old fashioned way, but it has to be done eventually.

Now inside your Active Campaign account, you want to create a custom field and I’ve already done this one. So under let’s go to lists are there it is managed field, you want to create a custom field that’s the whole purpose is simply for the bot. I’ve created one called favorite color and it’s a text input, text input output is important here because we want to be visible but we are going to it does we do not want a hidden field.

And then I’m going to take this code and embed it on my site. Now let’s be honest, it’s not going to be super pretty and that’s why you might be using something else to present your OPT in forms, but I want to show you how. So I’m going to just paste that in. I’m gonna save it and there it is.

And again, what I’m going to show you kind of in test mode, if you will, and you’re going to need to figure out how to implement this on whatever service you’re using to display your form. So I am simply going to inspect this, and I need to add a little inline CSS. Again, there’s multiple ways to accomplish this. So I want to add some inline CSS.

I’m gonna go ahead and put that in there. And I hit return, notice how it disappeared, I want to get rid of this favorite colored label too. So I’m also going to had some code, come on. So there the only two fields showing up for me anyways, our full name and email, but not favorite color a bottom in their hand, or is going to see three text fields that he’s going to want to fill out.

So that’s one thing. Second thing is inside my Active Campaign account, I want to create an automation and I’ve already started and actually did this, but I do need to make some changes to it, and I want to trigger it, we can trigger when the context field favorite color changes and then we actually have to do a test.

So I’m going to actually go in here and I put this five minute wait, just kind of so we can watch how things work. So what I’m going to do is I’m going to do an conditional check, and I’m wanting to go to custom contact fields favorite color, and I want to say greater than empty. So in other words, if it has something in it, then go down the yes path.

If it doesn’t, well, just in the automation. So the way I’ve got this setup, it’s just a one time deal. Whenever the field that’s called favorite color changes ever run it the first time, the contact is added or updated. And then I’ve gotta wait for five minutes, just so we can watch and see what happens here.

And then we check is the favorite field greater than empty? If it is, let’s unsubscribe. The assumption is that that’s a bot. So let’s go fill this out. And again, I’m not feeling in my favorite color and I’m going to submit that. Alright, so now let’s go find that contact and see where they are in this automation, assuming they’ve had it.

So notice no favorite color because I didn’t do it specify. I’m on a list and I’m in an automation so let’s go view that automation out. If everything works properly I should go down the no path. So instead of waiting for five minutes, let’s just skip this and see what happens. Great, I did not get unsubscribe because I don’t have a favorite color.

That’s how you can help block spam bots for Active Campaign.