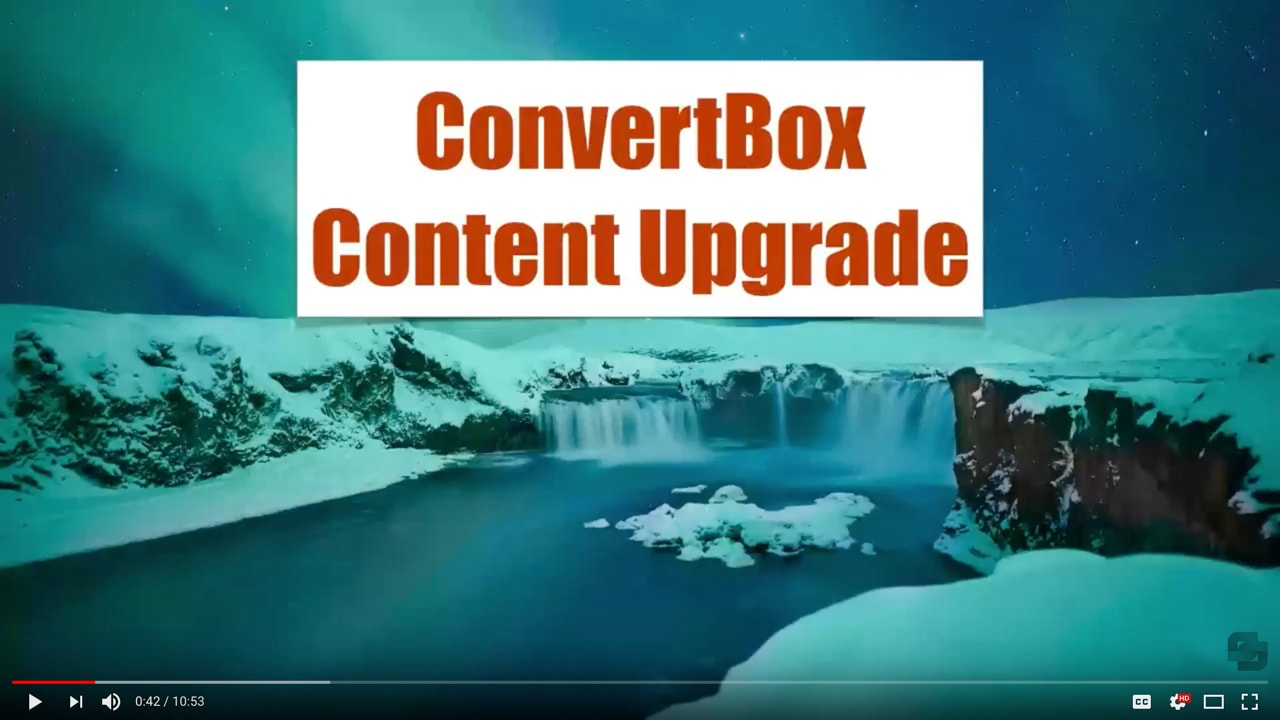 Today we’re covering and ConvertBox how to do simple content upgrade.

Be clear, what I’m talking about when I talk about a content upgrade is when somebody signs up to your email list you’re providing them in this case a PDF file that’s appropriate based on the page that they signed up from. And my opinion the great thing here is it just happens there’s not a lot of configuration you have to do there is the fact that we one rule that you need to follow but it is it is pretty darn simple. And just just to be sure we’re all on the same page. Let me show you an example.

So on this page right here, if I sign up after convert box pops up and I put a different one on here and there it is, since I sign up I immediately I’m going to get a PDF downloaded to my computer and there it is right there if I go to a different page and I think I’ve got one more setup.

And if I sign up there, I will get something else appropriate based on this page. I’m going to sign up one more time and they’re different PDF file related to the page I just signed up. So how do we do this?

Well, it’s pretty simple. That is a basically a one time setup. And then automatically as you saw, it delivers the content to the person that signed up there is one rule that you need to follow. I’m going to show that on the next page. And I’m going to kind of go into details but honestly it’s a simple rule to follow.

Then the page URL needs to have that dog dash Karen it and it needs to be kind of an exact match, if you will. And I’ll give you some examples to make sure it’s clear. So and you know, most people, this is just going to happen automatically. It’s for the people that might put in strange characters, but what you need to do is whenever you name your pages and files, please use letters, numbers, dashes, underscores, that’s it and that’s what most people do no white space can’t put in a white space in the name so as an example these are pages that would absolutely work again dog dash care peak dot PDF is the name of the content upgrade file for instance the first one there is simply dog dash care at the end that works dog dash care with the slash at the end works and it’s kind of a WordPress setup the third one dog dash care dot html that works the number four which is capital case with a dot htm

Know that works. Number five, it’s got the query string parameters at the end, that works, that’s fine. And number six, I hope you don’t do this. But you can actually get away with this. If you put a kind of a strange or weird character in there, that would actually work as long as the name of the file doesn’t have that character. Because when the script that delivers the PDF works, it’ll strip out that that kind of strange character there. So those are the type of file names that will work or page URLs that will work with, in this case, the dog dash care PDF

over here, here’s what doesn’t work. And number one, what’s different there is it says dog dash cares. That’s not an exact match. It’s not exactly the way the name of the file is. And the second one has an underscore in the file main are sorry, the page URL, but it has a dash in the file name. So that’s not going to

um and then inside your convert Box account there’s just one thing to do for whatever convert box you’re going to be using is after somebody subscribes you want to make sure they get redirected to a year.

URL that’s important. And it’s important that it’s URL that you own. And it’s a subdirectory. And I’m going to suggest to use the subdirectory name PDF, because we were delivering PDFs. So that’s all you have to do. There’s nothing else in that URL that needs to be there just has to have a name that you’re going to redirect people to so they can download or get their PDF file immediately.

And then just inside your hosting account, in this case, I’ve got a subdirectory called PDF. I’ve got my PDF files and notice the naming structure. We already lived a dog dash care convert box if I have a page called car I have a PDF for that I have one for phone that works also there’s a file called index dot php. So you would create that and I’m going to show you the content and give you a link to it at the end here, but you basically have all your PDF files in there and then you have a

now not trying to confuse or just throw stuff out there. But this is what’s in there. We’re not going to go over exactly what it does. I will point out that very first arrow up there, the only error I’ve got points to something called Thank you dollar Thank you URL and between the double quotes you want to put in a page to send somebody to thank them. And that only gets used if there isn’t a file to deliver to them. So it’s kind of a backup otherwise they would get redirected to a blank page. So recall from the example we did when we went to dog dash care the PDF file immediately downloaded and then I stayed on that page. However, if I did not have a content upgrade file, I would have been redirected somewhere or not, I would have been redirected.

To my PDF directory and it’s just a white blank page.  My recommendation is up there you put in a specific URL like http colon slash slash example calm forward slash thank you it’s kind of a backup just to make sure that they see something appropriate

and I’ll be honest I’m in the Convert box Facebook group and I posted this the other day I haven’t seen a reply to it and there’s a reason I’m asking this is because uh. I want to make this a little more advanced and I’m showing you so far which is basically you know, I want convert box to send back the email address that was used by the person that signed up. The way it works right now is great, it immediately delivers the content upgrade. I guess the downside to that is somebody could just throw in whatever email address they want and get my content upgrade. I’m okay with that. But I’d also like to have a little more control so hopefully they will address that.

This, I’m going to take a bath that they will add this as a feature. But the reason I point that out as I put a couple boxes around a little bit of the code there, and this is kind of for future development soon as they have made that change and I’m suggesting I’m going to update this script that this works as it is, but in the meantime, I’m ready to catch the email address if they ever do send it over that’s near that box in the top the box at the bottom is going to basically add to your email system, their content upgrade URLs, so instead of you set up delivering it right away, you can deliver it via your autoresponder so that way for instance, they might have to confirm their address to actually get the content but that’s the idea um, you know, the idea is simply you can create a folder on your site put in a script upload your can apply files and the only thing that really matters is that you make sure the name is the same as the URL of the page that they signed up for. And that’s about it.