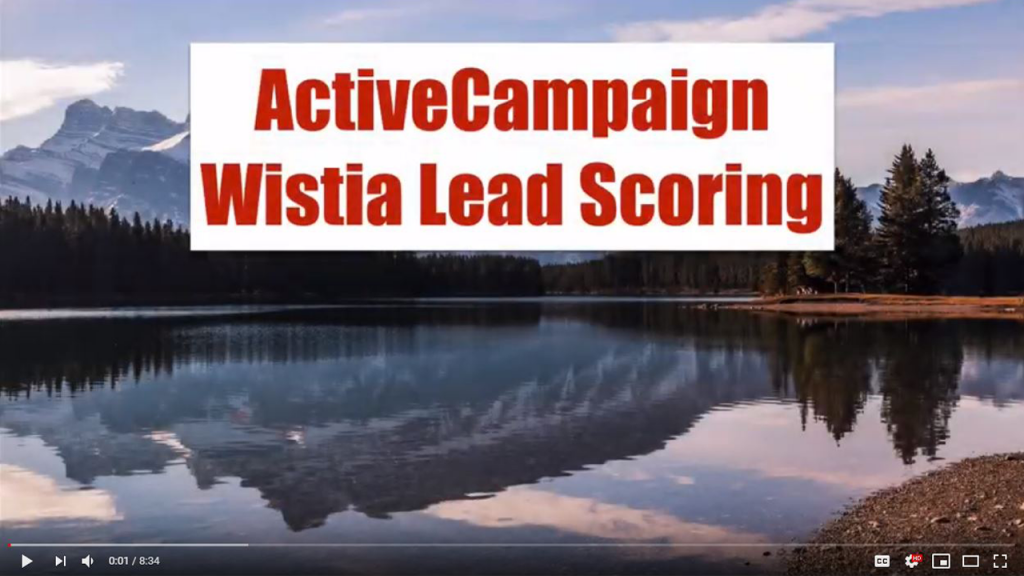 In this video I’m going to cover how to lead score your contacts in Active Campaign based on video viewing, specifically Wistia video viewing. And one thing that’s really nice about this setup, there is no code to install. There’s some initial setup but once you’ve done that you’re done with any kind of code. And we’re going to take people based on how much video they watch.

Wistia is kind enough to send over information, did they start watching 25, 50, 75 or 100 percent of the video and the only thing little bit out of the ordinary we need to do is when we send an email from Active Campaign to a video on either our page or on a Wistia hosted page we need to include wemail= in the URL. That’s how we can identify who’s watching the video.

To start with, we need to go inside integrate pro video. This is what’s going to Connect Active Campaign with Wistia. Now, I’ve already set up my accounts, the one called Wooding for Wistia, and active campaigns called Wooding. Those are the ones I’m going to use, the only thing I need to do is get some tags that I want to use. So I’m going to go to here because I know where this goes and I’m going to go where it says to create tags and the recommendation is you want to have something that looks like this format as a way to identify people.

So I’m going to come up with a name, whatever the video name is, and let’s go find, it’s called Silent Selling Sarketing. So I’m going to make a little shorter version of that, I’m going to call it there it is Silent Selling. So I want to have one tag per event in Wistia. So there’s the different events watch 00 is when they start 25, 50, 75, 100%. So now I need to go into here, I’m going to add those tags because those are the ones I want to use to get somebody tagged if they watch that video, and that is it for tag.

So now I need to set up an automation inside here. So I need to select the Wistia account I need to select the Active Campaign account and then set up some rules. And my recommendation is you use one video, one rule, one tag to add. I don’t usually use the Remove but you could. There we go. So I’m going to make five rules, one for each.

So now back inside Video Lead Scoring Automation, I’m going to set of trigger for each of those tags. So there’s going to be five triggers, only going to let them come in once per tag, because I don’t want to let them so and rewatch a start over and over. So I’m gonna leave it at once and I’m going to create one for each tag.

So there, we’ve got five different entries, five different tags, they’re all associated with how much of this video they watched and then I’m going to do something like how to score. Where is that guy? So we’re going to update, do some math and I’m going to pick a field. Let’s look for the lead. Where are you lead score, and we’re going to add one. So I’m just going to add, they should have up to five points from this if they watch the whole video, and then simply in the automation.

What we’ve done is inside here we set up rules so that if they watch this video, they start, they watch different percentages of it, they’re going to tag them appropriately and then Integrate ProVideo is going to connect with my Active Campaign account to add these tags, these tags are going to trigger an automation that will add a point to their lead score and we could do something else, we could then send another email based on certain points or certain tag being applied. But let’s just test this out.

So I’m going to create a campaign and send it to myself and it’s going to be well, let’s get this video and remember, I need to add question mark, in this case, wemail=. So that needs to go inside my campaign. So I’m going to set one up and I’ll come back and show you when I send it.

Okay, so here’s a email I’m going to send out and I’m just simply going to paste this link in here and you know what, I’m going to cut off this part right here. I don’t really want them to see that I don’t have to distract them. I’m going to highlight that, make sure it’s actually got the wemail and so it does, let’s say okay, and maybe put my name down there. That doesn’t look good does it? Let’s change that font style and we’re doing that guy and I think we’re doing 18.

Okay, so I’m going to send this email to myself and I’m going to click on this link, it’s going to pin that wemail to the URL and let me make sure it’s only going out to one person. There it is, I’m going to go ahead and send now and I’ll open that email, click the link and start watching.

I’m actually going to watch in a different browser, I don’t want to get it confused. So let’s go check my email. Now. Here’s the email I’ve got and you know what, I’m going to click this, let it open in Chrome, but then I’m going to open it in Safari and actually play it so, so a little bit of cheating here. Because what I’m doing is I’m pasting this link in and you’re going to notice this wemail disappears when you visit a Wistia page.

So let’s start playing it and it can take a minute or two, let’s not listen to me.

So I’m just going to let this play in the background and we’ll go check the Active Campaign to see if I’ve been tagged.

So let’s search for myself.

So I saw one tag, so this Wistia Silent Selling tag, and I went through here so let’s check my lead score is one and that correlates to having one of these so far, so let’s check where I am on the video.

And I should be about a quarter of the way through I’m just gonna let it run. Sometimes there is a little bit of a lag for these tags to get added. So far, so good. I’m up to 2 and I’ve watched 25%.

So it’s going to continue to add points to my lead score as I watched the video. Now, if I stopped watching the video, I wouldn’t get more points. So this is a good way to identify people that are interested in what you have.

About the Author Dave