ActiveCampaign Segmentation Using And Or Logic 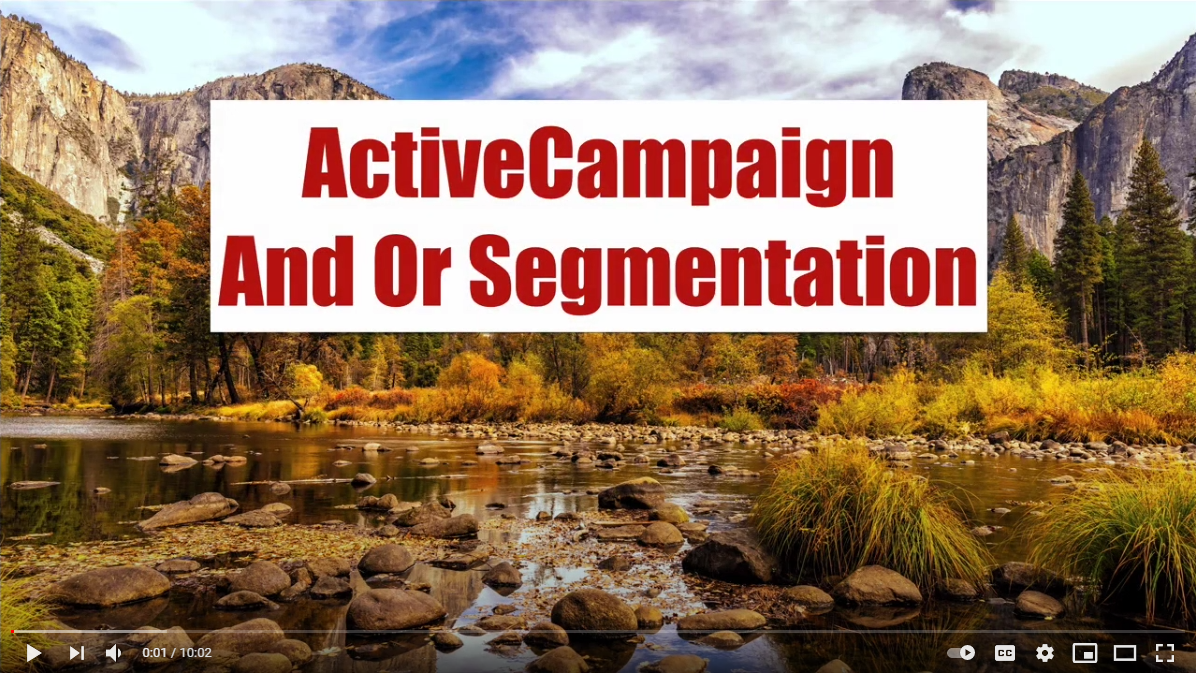 Active Campaign And Or Segmentation.

In this video we’re going to talk about how to use the capability that Active Campaign provides for segmenting based on And or Or. Now I’ll be honest, this can be challenging and if you get one thing from this video, it should be this one slide right here and my recommendations are keep positive and negative logic separate from each other.

So we’re gonna dive in, go through some examples and work our way up to actually some useful ones. So you can understand why I’m suggesting what I do. Now, here’s the scenario, we’re just going to map out something where a person can have Temp A or Temp B tag, or both or none. And so I’ve printed all the scenarios there. And then we’re going to make some segments and see how they work.

So first one is simply does the temp A tag exist? Now in this scenario, there’s two people that meet that person three in person four.

Here’s one words, does the Temp B tag and yes, two people again, except they’re different. Person two has the Temp B tag person four does. Now it doesn’t matter what else they have. It’s Do they have this specific tag.

Now, here’s where we get into using And, or, Or in this case, it’s an which I think is easier to understand. What we’re looking for here is somebody or somebody’s that have both tags, both Temp A and Temp B and in this case, there’s only one person, person 4 that has that.

This is Or logic, it’s one or more. So we’re looking for somebody that has at least one of those tags, either Temp A or Temp B, or both and three of the four do, person two, three, and four have that condition.

Now, here is negative logic with And, so we’re looking for something that doesn’t have Temp A, and they don’t have Temp B. Well, there’s only one person that needs it. That’s person one, because everybody else either has one of those tags, or both of those tags.

Now, here’s the scenario I don’t recommend you do however it works, it just gets a little tricky. If there’s an alternative way to implement this, I would recommend it ad I’ll show you a scenario where this happens.

Now, I do not recommend this, even though it totally works makes sense. Because you could have a more complicated segment requirement and you would have to break this and rebuild it. So why not just start right from the beginning. However, if we just read the logic here, it says, okay, you have to have Temp A, but you can’t have Temp B and there’s only one person that meets that and that’s person three.

Again, don’t do it like this. Do it like this, basically break it up into two chunks within a segment and you can do this in Active Campaign. Still, the same thing, still meets the same requirements they’re separate. If we were to add more requirements, we’re going to keep all the positive logic stuff together and all the negative logic stuff together. And guess what, here we go.

So we’ve got three different tags and I’ve added more people To show all scenarios, not that we have to go through every single person every single scenario, but in this case, we’re saying, you have to have all three tags. And guess what, there’s only one person that meets that requirement.

And the next one is Or, it’s one or many, the only person that doesn’t meet that requirement is person 1 because they that person doesn’t have any of those tags, but everyone else has at least one of those tags or more.

And then here’s And with negative logic, so we have to make sure every person meets all these requirements, they don’t have either a, b or c. And again, there’s only one person that does that and that’s person 1 in this case.

Again, don’t recommend this one, but it is possible to do it. So if you use an alternative way, I would recommend doing it.

So think about it. The alternative way to create this is to say somebody that has all three, that would be a yes, and everyone else is a no. And I’m going to show you how to use that shortly here.

And it basically says if they meet these requirements, put them down the yes path, and they will get an email. On the other hand, on the right, we’ve got the And with positive logic, which is much easier to understand if you meet the requirements, you still go down the yes path get guess what, you’re not the one getting the email, the people on the right hand side or the no path is what going to get the email.

Again, this, the results are identical in terms of who gets the email, the logic that was used to implement this is I’m gonna just say 180 degrees different, I find it much easier to understand the positive logic and the And logic on the right than on the left. Because on the right, we’re basically looking for one very specific conditions. However, on the left, it’s almost like a double negative does not exist, or this one doesn’t exist.

I’ll let you decide which one makes sense to you.

Now, let’s just go to another level, this is a real scenario, this is something people might want. And the way this reads is, we’ve got to two segments or two sections here in this segment, the one is the positive logic with an Or and the bottom is the negative logic with the And. And we’ve got 16 different combinations that you could possibly have.

So here’s what I’m going to do. We’re going to look at the conditions for just this one right here. It says, you have to have No for Temp C, and you cannot be on the list. We’re basically anyone that has No here and No here is a maybe.

And there it is. So there’s four people that are maybes, four conditions, if you will, that are maybes. And by extension, that means all the other options are No, they’re not possible.

So we’re basically down into four people that we then have to compare it to our top section to see if they meet. And what this says is this temp A exist or Temp B either one doesn’t matter. So the first one is a is a No. So we’re not putting no there. And guess what all the others Yes, because Yes, it has B Yes, this has A and Yes, this has A and B.

So that’s Active Campaign And Or Segmentation