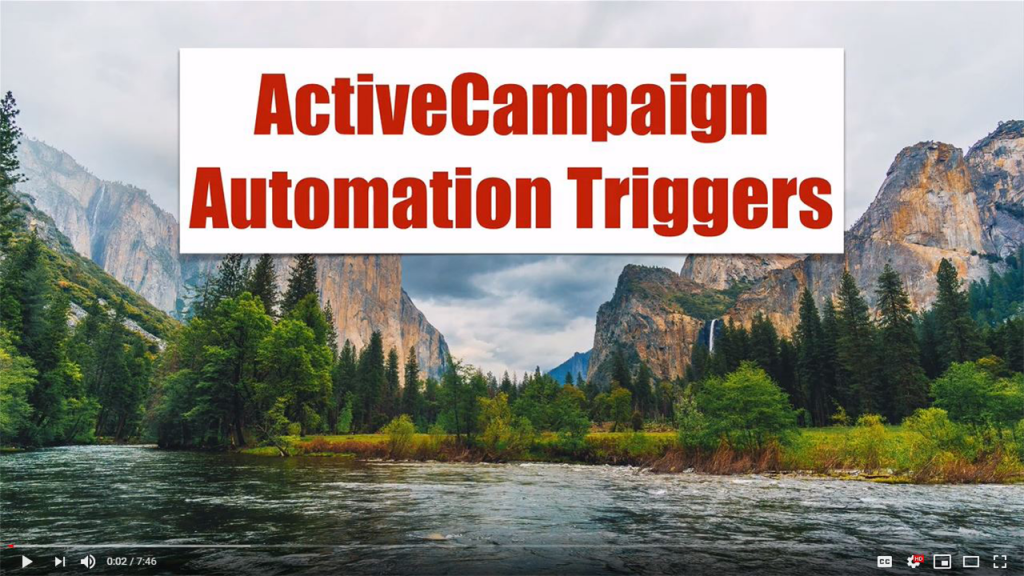 In this video, we’re going to cover a few things, I’m going to start by showing you some examples of triggers, a trigger versus another method of getting into an automation, and then single entry versus multiple entry, and finally, once versus multiple times. Those last two things are some subtle but very important distinctions.

So let’s dive right in.

So inside your Active Campaign account, you want to create an automation, and the first thing that you get prompted for is to add a start trigger. And I’ve already started this and that’s why you’re not seeing things happen to what you might, but go ahead and click on Add a start trigger and there’s a number of things available for you to trigger off.

And in my opinion, is kind of order of popularity, if you will, if somebody subscribes to a list you can add them vice versa if they unsubscribe from the list you can do something. And it looks like this. For instance, if somebody unsubscribed I’m going to click on that and then Continue, and then you pick a list or all lists, and then you decide on how often you want this to run, once or multiple times.

And then so to continue the examples, open reads an email or submits a form. That would be like the Active Campaign form that submitted, open reads an email is okay in my opinion, and the reason I say it’s okay is services like Gmail will preview emails and sometimes that triggers an open so it’s kind of a false positive view. My opinion not a great way to do it, but it does work. Clicks a link in an email, definitely a better one. Webpage is visited is based on you having tracking code on your site, so that you can trigger off of a visit events, you can do that based on that.

I’ll be honest, I haven’t used shares and email forwards an email or replies to an email. Okay, you know, you can share an email for instance, and I say like on Facebook, Twitter, any email, any list and which network or all networks and they’ve got a number of them. Tag is added this is a good one because you might have something happen that adds a tag or removes the tags, you do have that option.

You can do goals achieve, let me just show you that. And so whatever goal you have, you can set an automation to trigger off that, and usually you typically have my pin one goal at the end of an automation and then you could trigger off another one.

Date based lot of times, this is good for one off events so that you can prevent people from getting added to an automation after a certain amount of time. You could do it based on actually this is what what it’s showing starts certain number of days on, before, after and specific dates that you might have in custom field and then contacts timezone ban I don’t recommend that either, because sometimes the time zone that Active Campaign picks up isn’t appropriate and it goes back to, for instance, Gmail, opening their emails and all shows Mountain View, California is their time zone and we know not everybody lives and works at Google. Better, in my opinion to is to use your time zone.

RSS based, I don’t think I’ve got this capability, that’s correct. A conversion occurs makes it purchase abandoned cart. You’re going to need I think to have Shopify for this, for instance. There we go. And then you can have this fire based on a cart abandonment situation.

And score change, I don’t have that setup, pipeline, deal change, deal status changes, all those are things you can trigger off, you can also not trigger off of anything and that lands itself to another automation triggering the current automation and I’ll be honest, I use this a lot, especially with connection to a shopping cart.

And that kind of falls under the trigger versus others. So we’ve got triggers here and if you start without a trigger, that would be the other, and typically what happens is another automation that puts them into this automation. So that’s the other way or manually.

Now, here’s what I see a lot of people do and I recommend in general, just having one trigger, one trigger, it looks like whoops. So a lot of times I see people have multiple triggers, which is okay, but you just have to know how to deal with that.

So in this case, I’ve got one trigger, and it’s based on a tag being added and I’m allowed multiple times. So for now, I’m just going to put up the ones because I want to talk about that in just a second. So there’s a tag that when applied, puts them in here, we can have another trigger and this could be, for instance, subscribes to a list, and I’m going to say a particular list.

That’s not necessarily the action you might want to have happen if you truly want them to get put in there just once even though you have multiple triggers, you need to do something else. Typically what I like to do is I put an if statement here. So I’ll do an if else and then I’m going to use a tag, do they have a particular page or not, does not and I’m just going to use this one, let’s just say that’s the tag.

So if they do not have that tag, send them down here and then the first thing you do is you actually apply that tag. So I’m going to apply that tag that’s not therea nd so what that means is if they come down here again, or come down through the other leg, so if they come down through the other leg, so for instance, that they came through here, they didn’t have this tag, they go down here, they get this tag and now let’s say sometime later, before they’re out of this automation, they get this tag apply this same a different entry point, in this case, subscribe to list, they come here, it’s like, oh, you already have the tag. Let’s exit.

So that way, you can truly prevent somebody from getting added to an Automation more than once, even though they have multiple triggers. So the other thing you could do is if you do want to let them back later at a later date, at the very end prior to exiting, you could say, okay, remove that tag down so they can come back.

So as soon as they add in this automation, they have a second chance to come through. We could also put a significant delay in there if you want. So that you they can only do it like once a month, so maybe every 30 days. So at the very end of the automation, put a long wait, then remove that tag so that if they do come back in, they actually can go a month later at the earliest.